The End of Gotham Alleys 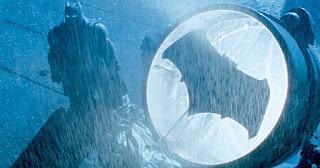 As many might have noticed, there has been no updates for a long time now. I started a research on Snyder-verse however my researches take such a long time I just won't be able to finish it now. I have way too much on my hand and as much as Id like to theres no way I could continue the blog with as much research and accuracy as I did before. If I can't give it 100% I don;t want to do it. For example, a research for certain articles such as History of Joker took nearly a year as it required me, along with some other articles, to carefully re-read every Batman issue since 1939. I'm not able to do that now. I will do one more post at some point which will feature my top 3 all time favorite Batman comics. Till then, thank you all for all your interest, praise and great comments
Posted by GothamStreets at 9:26 AM 17 comments: 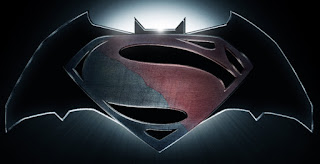 In response to the countless questions about the updates on the blog with the additions of the new, so called Snyder verse - they are coming...eventually. The other entries in the blog took an insane amount of research and dedication. For example, the article on Joker took close to a year (about nine months), the articles on the various incarnations of Batman on the big screen took close to that, as I had to literally re-read every-single issue of Batman and his guest appearances in other comics ever published, not to mention dig around every piece of press ever written on the subject.

Having a new onscreen incarnation of Batman is both unexpected and exciting to research on and write about since there's so much new material to sink the teeth in. However, I do not have the luxury of time as I did few years back when I actively contributed to the blog. Also, my knowledge of the Batman comics past 2008 is severely lacking, although this could be handled by my fellow co-writers.

But - it will happen, it just needs time, and lots of it. The Joker history article WILL be updated with Jared Leto's interpretation, and there WILL be a "Batman in the 2010's: Ben Affleck" article, but don't hold your breath just yet 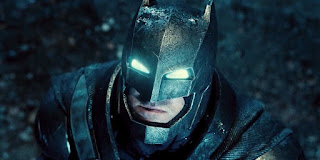 Posted by GothamStreets at 6:24 PM 25 comments:

The 60's utility belt was one of the very few things that differed from the comic book counterpart of the time. The most noticeable difference was that it didnt have pellets and instead had an actual compartments for the gadgets. The list of gadgets from the 1960's series is very long, but one of the most recognizable ones i the Batarang, folded in half and hidden in the utility belt 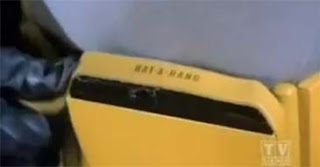 The Batman utility belt heavily resembled the comic book one. It was yellow/gold ,and consisted of rows of ampules that held most of the smaller accessories. That type of a belt was the original Batman belt which survived in almost unchanged form for decades, which he prominently used from 1939 to 1999 ( with the rare appearances of variants). However, unlike in the comics, the movie belt was entirely made of metal 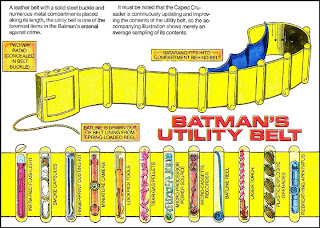 Bigger things like Batarang, Grappling Gun and Batmobile Communicator are on the back of the belt and are sliding to the front on a mini motor device. It's an interesting take on the fact that in comics and cartoons the heroes always pull something out from behind. 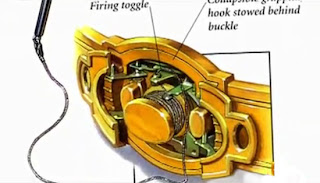 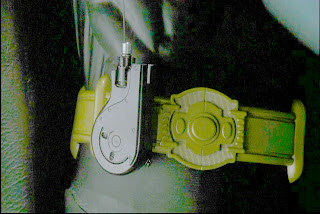 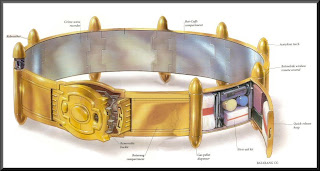 
In comic books, the Dark Knight doesn't carry a gun that shoots bullets. In the film, he is armed, however, with this weapon, the Grappling Gun: A spring action, speargun-like device that shots a grappling hook and, when needed, paralyzing gas. It's an original device designed for the movie

The Batarang is beside bat-grapple Batman's usually assigned defensive weapon. It resembles a boomerang, and it can come back to its thrower. It can be folded up in the center in order to be attached to the utility belt. 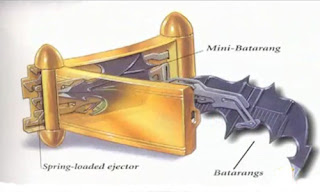 
Batman uses this in the museum scene. This weapon can shoot two steel nails that pull wires at opposite directions, and then it serves as a trolley for a quick escape.

The smaller accessories are kept in the golden ampules, just like in the comic books.

Batman used them throughout his long history, and they were one of the first accessories shown from his utility belt 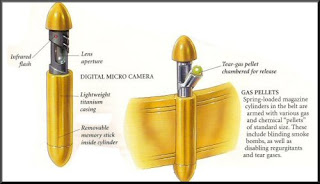 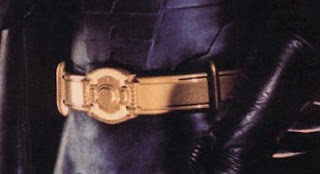 The Batman Returns belt is the same as the one from the first movie. The one difference is that the launcher was now on the lower part and it was operated with the thumb 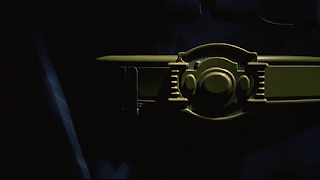 Something that changed was the look of the batarangs. This time the batarang looks more similar to the comic book, apart from the fact that it has a small LSD screen. The screen was used to target the enemies around Batman. After the weapon was thrown, it would seek and hit the targets wherever they were.

The grappling hook in Batman Returns is based on the first model from the previous movie. It is revised around the handle. Now it has more chrome parts. The launcher now is not at the lower part, but on the upper surface and it is operated with the thumb.

These little tubes are hidden in the utility belt, and contain several mixtures of chemicals. They have several effects when thrown separately or mixed together. The blue is napalm, the red explosive and the green KO gas.

A completely revised version of the first movie’s Gauntlet. This is a more elaborate gadget than the Speargun, allowing Batman to fire hooks connected to wires and pulleys, which he can ride to safety.

The Batman Forever belt was significantly redesigned to reflect a new generation of Batman movies. The extreme redesign that the entire suit got was Joel Schumacher's idea, and the coloring changed as well - black was now mixed/accented with silver. By the end of the movie Batman switches to the new costume which "looks futuristic. It's not black but dark silver"(JS).

This film saw a dramatic change to Batman's basic weapon, the batarang. This version can be folded in the center, then the two wings are shifted apart. The process is automatic

The look of the grapple changed dramatically for Batman Forever, to fit with the ''new'' Batman. Now it can cut through hard rock, as seen in the bank sequence.

A strange variation of the batarang. It is hidden in the utility belt, and it is driven out by a launcher and placed automatically in Batman's hand.

This weapon is thrown around the feet of Batman's enemies and ties them with a thin rope. Then, with the push of a button in Batman's glove it can cause an electro shock.

This proven weapon appears in two new versions. Batman has now a launcher for the Batarang on his lower arm. Similarly as the rope the Batarang is shot by an easy movement of the arm.

The Grappling gun this time is very different from Batman Forever. It can be attached on Batman's glove or the utility belt. The 90m rope it launches can carry as much as 400 kg.

This bat-shaped portable bomb can be either thrown or attached with a magnet.

This tool is used in the film to melt ice. With the push of just one button Batman can control the intensity and range of the laser beam. With the laser one can cut alloys as well as ignite inflammable materials.

The Batman Begins utility belt features small compartments, like the belt worn on the TV show and first shown in comic books such as Year One and The Dark Knight Returns
Batman's Utility Belt is a customized Wayne Enterprises high-tech climbing harness, usally worn over the nomex survival suit that serves as Batman's body armor. Magnetized impact-resistant pouches and canisters line the belt at ergonomic points for ease of reach. In these storage spaces, Bruce has relaced the harness' original complement of carabiners and pitons with the crime-fighting tools of his trade. Finally, Bruce removed the shoulder and chest straps because they constricted his movements. 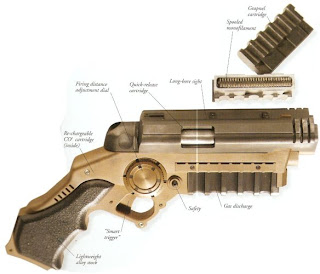 Christopher Nolan's borrowed a couple of elements from the original Tim Burton movies, like Grappling Gun (among the sculpted expression on the mask, black makeup on the eyes and the suit being an armor). The pneumatic grappling gun features a magnetic grapple and monofilament de-cel climbing line tested to 350 pounds maximum holding strength. Early renditions borrowed from centuries old musket design, as well as modern firearms. The final version, in keeping with the design of much of the film, is streamlined, simple, and extremely effective 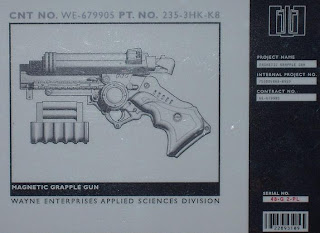 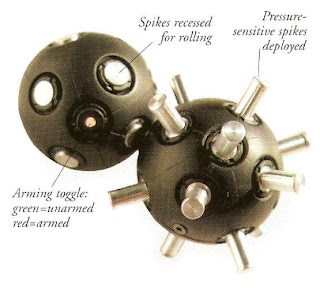 Mini Mines and explosive packets can be used for a variety of offensive and defensive purposes, including creating diversions, disabling getaway vehicles, or defeating locks 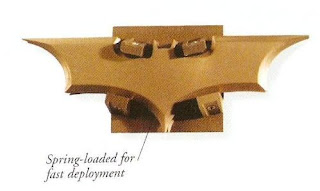 Based on the Ninja throwing stars called Shurikens, Bruce designs these weapons in the shape of a Bat, the symbol he adopts to strike fear into the hearts of criminals. 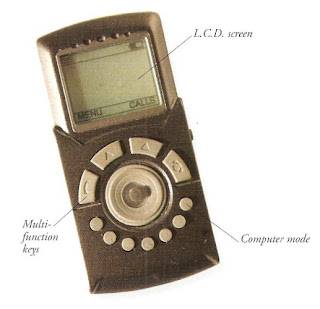 The Cell Phone and Palmtop computer all-in-one, this high speed processor is encrypted for maximum security. Voice-activated for hands free use, all calls are "Piggy-backed" on WayneTech satellite transmissions and are therefore completely untraceable.

The Dark Knight belt is the same as the one from Batman Begins, although one notable addition was made to the utility belt; an air-powered charge-firing rifle, which allows Batman to fire timed explosive charges from considerable distances and can be folded into two halves into a box-like shape to fit into his utility belt's compartment. 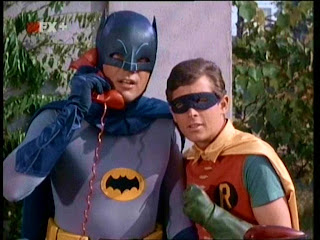 Some fans believe the colors of Batman's costume in the TV series are incorrectly interpreted, believing that Batman wasn't blue in the comics, but black instead. There's a belief that blue only meant to highlight the black. But was it really? It's safe to say it was both. It is possible that Batman truly did start  in black, but certainly in latter years he was officially wearing a blue suit.

The idea of Batman really being black in the comic books is supported by following quotes:

The cowl and cloak remained black, but since comics conventions demand that black objects be highlighted in blue, Batman’s uniform in effect became blue and gray.Batman: (The Complete History ~ Les Daniel 1999)

In Batman’s debut story, the key elements in his mythos were established; his eerie [black and gray] costume… Batman’s debut in Detective #27 has the estimable value of revealing Bat-Man (as he was called at first) exactly as envisioned by Bob Kane and Bill Finger. (Batman in the Forties ~ intro Bill Schell 2004)

However, some may point out that Kane's quote and first claim of Batman being originally black originated in 1989, coincidentally when the movie presented him as black for the first time. It's possible that it was just a retconning statement to support the movie. However, there are certainly elements in early comics which are undoubtedly black but colored in blue, such as Superman's hair. The early art also tends to support this thesis since Batman really was primarily black with small blue highlights 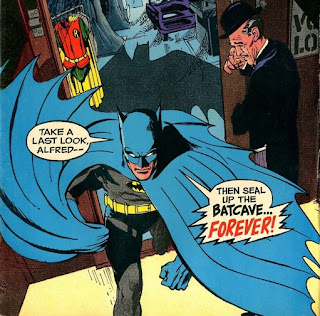 In the story The Super-Key to Fort Superman, Batman melted an identical wax-statue of himself to take it's place. And Superman clearly thinks to himself about the BLUE and gray blob of melted wax. He even tells it to Batman himself how the Batman figure is BLUE and gray. 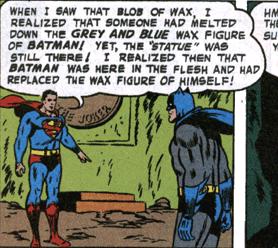 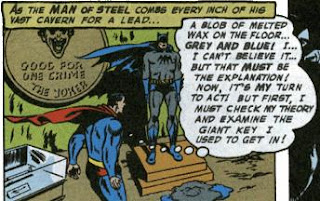 In The Strange Costumes of Batman! Detective Comics No. 165, Nov '50.  the suit is also described as blue: "Yes, it is the flashing figure of Batman, clad in the shadowy colors of blue and gray." 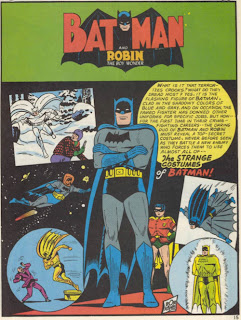 Verdict: It's very possible that Batman at first was black, but there is no doubt his costume was changed into blue down the road. therefore, Adam West's costume is spot on accurate with his comic book counterpart of the time 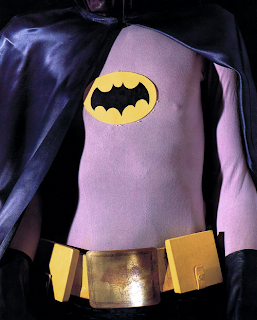 Posted by GothamStreets at 7:07 PM 37 comments: